HOW DID WE GET HERE? LESSONS LEARNED FROM NATURE AND YEARS OF EXPERIENCE IN THE FIELD 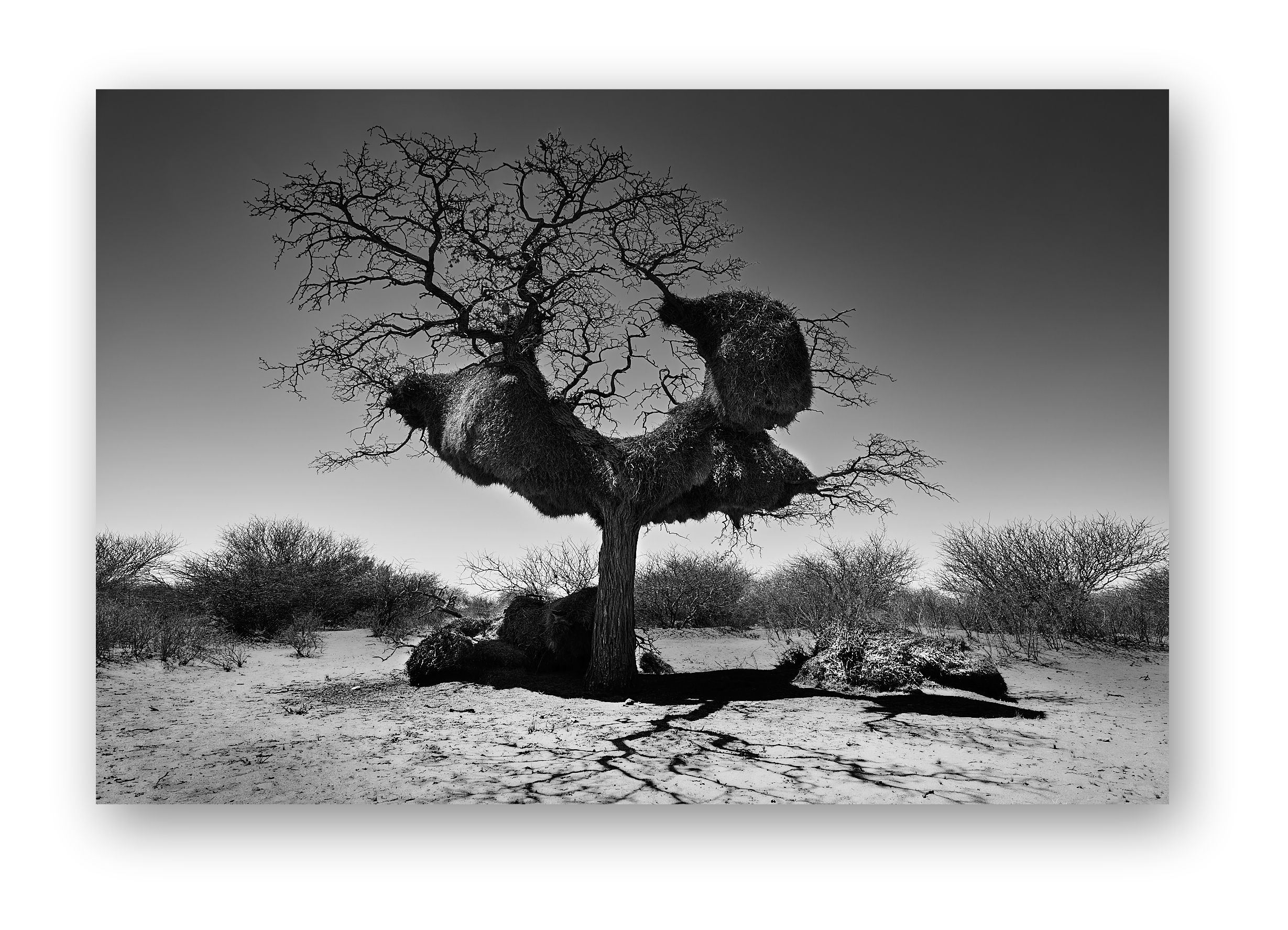 My photographic journey through Ancient Africa led me to this place that they call, "Witsand Nature Reserve"

Set deep in the Khalahari region is a nature reserve that features a huge white sand dune from which the reserve derives its name. The road to this place is the worst gravel road that I have ever travelled. But the trip was well worth the effort. Located in this reserve are two very interesting subjects that bring home the reality of global warming.

After settling into our campsite, I set out in the scorching heat to photograph this magnificent tree standing near to this humungous white dune and adorned with its giant social weavers nest.

This tree had an intreguing story to tell and I was going to tell it through my art.

Ask almost any landscape photographer and you will hear that the best time to photograph a landscape is during the so called "golden hour", the period as the sun rises or sets.

Ask me the same question and I will tell you that is correct, that is, if you want your images to look similar to the millions of landscape photography images captured every other day.

But I want my work to be unique, to generate  interest and tell a story untold.

So at midday, in the blistering heat of the Kalahari sun, I set out to photograph this magnificent tree with the biggest sociable weavers nest inside that I have ever seen.

With the bright sunlight beating straight down, an unusual pattern of shadows was cast onto the shimmering parched sand below. To me these shadows of the twisted bare branches resembled the patterns created by dry mud.

The light was also perfectly positioned to wrap around the tops of the banches creating a beautiful rim lighting effect whilst brushing the tips of the thatch that made up the nest.

A sociable weavers nest can have well in excess of 200 - 300 birds, each with their own entrance. The nest is perfectly temperature stable in this extreme climate. Sometimes the nest gets so large and heavy, that it collapses to the ground and they simply start all over again from scratch. It's a matter of suvival.

My efforts and endurance of the unbearable heat was well rewarded and I was pleased with what I had capotured. However, it was only when I returned home that I noticed that there was a beautiful graduated bright patch of sky right behind the tree exacly in line with the nest. Apart from using filters, I do not use post processing tequinques in my work to manipulate my images. But this incredible light in the sky was there and I had not put it there.

I was naturally very entrigued so after doing some reserach and plotting the position of the sun at 13:27, the exact time of the exposure, I discovered to my amazement that the light was an upward reflection from the face of an extremely large white sand dune situated just over the horizon and out of view of my shot.

The white dune (named "Witsand") was formed by centuries of leaching of the red oxide found in the common red dunes of the region and created a highly reflective surface large enough to influence not only the colour of the sky but also the climate, vegetation and inhabitants for miles around.

I called my art, "A The Light in the Sky"

How this translates into an exclusive artwork

I am not one for flaunting the law nor do I approve of anyone who does. But in the ceative space, the so called "Rules" are merely guidlines that exerienced photographers have develooped over the years to improve the experience of thousands of casual photographers who just want to go home with an image that they can be pleased with.

However, when one is creating art, then it is okay to apply one's own techniques and skill to achieve the desired artistic outcome even if that means "breaking" the rules.

The most important aspect however should always be to tell a story through the image. That's what makes it ART.

This large black and white print has recently been added to my limited edition art collection called "Ancient Africa."

Now you can own this luxury artwork.

HOW DID WE GET HERE? LESSONS LEARNED FROM NATURE AND YEARS OF EXPERIENCE IN THE FIELD